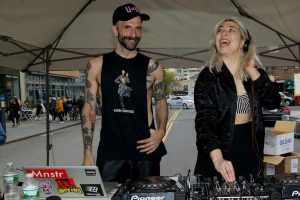 It’s not often that a tattooed, muscled leather daddy—one who’s a celeb on the local gay party scene and regularly posts shirtless selfies on Instagram with hashtags like #nastypig and #zaddy—leaves New York City to work in the upper ranks of the federal government. But that’s exactly what’s about to happen to Demetre Daskalakis, M.D., M.P.H., the deputy health commissioner in charge of NYC’s response to HIV and other infectious diseases since 2014. On Nov. 17, the Centers for Disease Control (CDC) announced that Daskalakis, 47, would become the federal public health agency’s next director of the Division of HIV/AIDS Prevention (DHAP) on Dec. 21.

The U.S. Military Officially Updates Its Policy Around HIV
Monkeypox isn’t like HIV, but gay and bisexual men are at risk of unfair stigma
Battling the Other Virus: Moderna’s HIV Vaccine
A Conversation About HIV and the Issues Black Women Face
Meet the First Baby Born to an HIV-Positive Sperm Bank
The 2021 POZ 100: Celebrating Black Advocates
Long-Acting Injectables and Younger People
Lil Nas X’s Baby Registry Raises Funds for HIV Nonprofits
The first mRNA-based HIV vaccine is about to start human trials
Are People Living With HIV at Greater Risk for COVID-19?
How Gay Neighborhoods Used the Traumas of HIV to Help American Cities Fight Coronavirus
Community Collaboration Cuts HIV
Spotlighting Eight Potential HIV Champions in the 117th Congress Ending HIV requires lawmakers in Congress dedicated to health equity, racial justice, sex education, housing and more.
Transgender People and HIV: What We Know
Ask Presidential Candidates to Prioritize ID and HIV
To the ‘Greenleaf’ Writers and Tyler Perry: HIV Is Not a Plot Twist for the Sake of Drama
Five Ways to Improve Diversity and Inclusion in Your HIV Service Organization
Empathetic Health Care Providers Drive Successful HIV Treatment
Remembering Dr. Ron Simmons, Black Gay Activist and HIV Champion Who Was So Much More
How Do I Pay For Treatment
The Unique Needs of Youth in HIV and LGBT Programs Forced to Go Virtual
How to Be an Advocate for Yourself and Others
How Can You Help Someone Who Has Been Newly Diagnosed with HIV?
Trans Women of Color Are Shaping the Future of HIV Advocacy
How to Happily Make it Through the Holidays with HIV
AFRAID OF HIV TESTING? #KNOWTHESCORE
People with HIV are growing old—and society isn’t ready for it
Long-Acting HIV Treatment Is Coming. Our Health Care System Needs to Prepare
LIVING WITH HIV PERSONAL STORIES AND EXPERIENCES
2019 National HIV Testing Day Community Partnership
7 Ways to Practice Self Care When You’re Living With HIV
ECHO, a Council of Youth Activists With HIV, Launches on World AIDS Day
UNDETECTABLE EQUALS UNTRANSMITTABLE: Groundbreaking prevention campaign takes the world by storm
This Instagram Account Is On a Mission To Honor Those We’ve Lost to AIDS
SHARING YOUR HIV-POSITIVE STATUS
Healthcare in New York State: Part II
The Affordable Care Act and HIV/AIDS
GLOBAL HIV TARGETS
FX Series ‘Pose’ Brings to Life HIV History Through Black and Latinx Characters
Stories from AIDS survivors emerge amid Pride’s commercial fervor
Are You Responsible for Your Friend’s HIV?
You, Too, Can Be an HIV Advocate! 10 simple ways to fight the virus every day
CDC Officially Admits People With HIV Who Are Undetectable Can’t Transmit HIV
Living with HIV Personal Stories and Experiences
Baby Boomers’ Behavior Adds to HIV Risk
HIV and discrimination in the workplace
I am proud to be HIV positive.
I’m an HIV Doc Who’s Losing Far Too Many Patients
Why Are We Putting People in Jail for Having HIV? A Grassroots Guide to HIV Criminalization: Facts, Foolishness, and Solutions
We Shall Overcome: HIV/AIDS Advocacy In 2017
A Cure For AIDS? HIV Vaccine Eyed With ‘Broadly Neutralizing Antibodies’ In Human-Like Mice